Home / About us / Meet the Team / Faculty / Brian Rosner 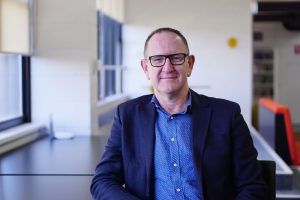 Brian grew up in southwest Sydney and spent sixteen years studying and working overseas before returning to Australia in 2000. He has worked as an electrician’s off-sider, a public servant, a school teacher, and a university and theological college lecturer. His ministry experience has ranged from student work and the local church to theological education, a field in which he has been serving for most of the last twenty years.

Brian’s father was an Austrian Jew who became a Christian while living with his parents as a refugee in Shanghai. Brian was raised in a Christian family, but it wasn’t until his university years that the Lord took hold of his life, and his faith and trust in Christ crucified and risen took root.

The family put a high value on education, and there have been several generations of ‘Dr Rosners’. Brian has three degrees from three different countries, culminating in a prize-winning Cambridge University PhD.

In the 1990s he worked as a lecturer in New Testament at the University of Aberdeen in Scotland, where Professor Howard Marshall was the departmental chair.  From 2001 he taught New Testament and Ethics and was Faculty Research Coordinator at Moore Theological College.

Brian is a New Testament scholar of international reputation, having contributed to many of the major journals and supervised over a dozen PhDs.  He is a member of the Studiorum Novi Testamenti Societas (the international society of New Testament scholars), a member the Holman Christian Standard Bible Translation Oversight Committee, a Humboldt fellow in Germany, and is the author or editor of a dozen books.

Gregarious by nature, Brian is a great believer in the mutual benefits of collaborative endeavor. His publications include the co-edited New Dictionary of Biblical Theology, a co-edited book on theological education (The Trials of Theology), and the co-written 1 Corinthians commentary in the Eerdmans Pillar series.  His current research and writing projects include a monograph on Paul and the law, various publications on the theme of being known by God and a book on preaching 1 Corinthians.

He is also passionate about promoting the gospel in the public sphere and is a fellow of The Centre for Public Christianity. In recent years his articles have appeared in The Age and The Australian and he has been interviewed on Compass and The Spirit of Things.

Brian is married to Natalie and has four children and one grandchild. As one known and loved by God, Brian seeks to find his adequacy in God as he serves as the Principal of Ridley College.

Hobbies and Interests
When he is not exploring how the grace of God teaches us to live, Brian enjoys bush-walking and golf (sometimes simultaneously).