Making technology a tool for a truly good life

This article was originally published in The Melbourne Anglican August 2021 issue. 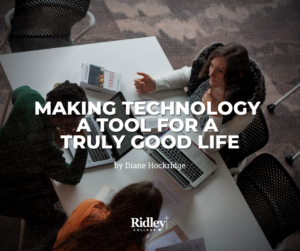 In the 1940s and ’50s, mathematician Dr Grace Hopper led teams of pioneers in early computing. Now almost all of us carry advanced computers in our hands, but prior to Grace Hopper’s work, most believed computers were only useful for calculations and mathematicians. Grace had the vision that computers could be instructed in English-like languages rather than 1’s and 0’s or mathematical symbols. The work of Grace and her team accelerated the spread of computer technology beyond calculations into public services and business.

Technologies transform our lives –the ways we live, work, travel, relax and interact– often positively, but they can also bring intended or unintended harm. The media often portrays technology in a negative light. We read about the ill-effects of digital technologies on mental and physical health, sleep, posture and relationships and its detrimental effects on the environment. Or we see headlines that focus on uncertainties and fears around the impact of technology. Recent examples from various media include: ‘Bank outage could be an unavoidable symptom of life in the cloud’, ‘What is a deep fake?’ ‘Should Alexa read our moods?’ ‘Staff unable to access patient files after cyber-attack at Eastern hospital’.
Technology is part of our lives these days. While we often think first of digital technologies – the phone in our pocket, Wi-Fi, the internet – technology has been around since people began making and using tools. We can think of technology as fundamentally being the application of knowledge to make practical change in the world.

How are we as Christians to think about technology? We all have to live and work with technologies and many of us will be involved in developing or using technologies in our workplaces or fields of expertise. Does the Bible offer any guidance about technology and the part it might play in the life of faith? Several principles can be discerned in Scripture.

Developing technology is a creative act
Developing and using tools or technologies is a fundamental part of our created human nature and purpose. We read in Genesis 1 about how God created the world good, created people in his image and gave them the responsibility of caring for the world and everything in it. Genesis 2:15 tells us that God put Adam in the Garden of Eden to work it and take care of it. The phrase ‘work it’ is variously translated as cultivate, till, or farm, implying the application of knowledge and use of tools to make good use of the world God has created. Genesis 1 and 2 also show us that we are all made in God’s image, and as such we are creative beings, able to make and create things. Technology and the ability to create it is a gift from God – and God wants us to use that gift.

Humans create and use technologies for good and bad, because we are fallen
Even though technology and the ability to create it is a gift, it can be used for bad. As Genesis 3 tells us, when people turned away from the good God intended, this brought widespread damage to people, relationships and the created world. Like every aspect of our lives in this fallen world, technologies can be developed and used for good and for harm.

We can think of many ways in which technologies enrich our world and our lives. Medical technologies enable elimination of some diseases, better health and longer lives. Improved food production techniques mean the world now is able to support billions of people. Fritz Haber received the Nobel Prize in 1918 for inventing a process for synthesising ammonia. It is estimated that two thirds of annual food production globally uses nitrogen from the process Haber developed, and this supports nearly half the world’s population.
Communications and information technology supports the spread of great ideas. Such technologies can be used to build the church and spread the gospel and create societies that are good. Throughout history, Christians have employed the latest communications technologies to spread the gospel and support the church, from the printing press to TikTok. Online study programs (like those offered by Ridley College) open up access to theological study to equip people for Christian ministry. In these pandemic times churches are finding creative new ways to communicate and care for each other using a range of technologies.

But we also know that technology can be used for harm. Fritz Haber, our food production hero, is also known as the ‘father of chemical weapons’ for his development of poison gasses used in World War I. We are all aware of the many negative effects of digital technologies on our societies, such as the cyber-bullying, trolling and cancelling unleashed through social media. These uses of technology not only bring pain and suffering, but destroy people’s lives and spirits. Evil and suffering is very real, but the Bible tells us it’s not the end of the story.

God is redeeming us and this world
God hasn’t abandoned the world and the people he made. He is actively working to redeem us and to bring about good for this world. “See I am doing a new thing” he says in Isa 43:19. God is constantly working to redeem and renew, making new people in Christ (2 Cor 5:17) and ultimately a renewed world which will only be good (Rev 21:1-4).
While the list of technologies intended to do harm is a long one, we also know that God can use for good what was meant for evil. Isaiah 2:4 says “He will judge between the nations and will settle disputes for many peoples. They will beat their swords into ploughshares and their spears into pruning hooks. Nation will not take up sword against nation, nor will they train for war anymore.” I love this idea that God wants people to turn weapons technology into something of benefit. A great example is the end of Haber’s story: doctors treating the casualties of Haber’s mustard gas discovered it was a potential treatment for cancer – leading to the development of chemotherapy.

As Christians we are called to be part of God’s grand plan of redemption and reconciliation. And this is a call on every part of our lives, including how we develop and use technologies. Let’s look at some biblical principles for using technologies in line with God’s purposes to bring about good in His world.

Care for this world
God wants us to look after this world. He made us stewards of it (Gen 1:28), tasking us to look after it on his behalf for its inhabitants. This means that we should be concerned about damage to the earth from what we do and what we consume. Most of us are excited about new devices and technology but we know that they use finite and rare resources, as well as creating waste and pollution. As stewards of the earth we can contribute in a small way by choosing sustainably made products, or like previous generations, buying things that are designed to last and repairing where we can. We can also choose moderation: do we really need that second car, fridge or device? Some of us will have responsibility for choosing and using technologies in our workplaces and can promote ethical and sustainable choices for these. We can all speak up about caring for our world in our workplaces, spheres of influence and the public square.

Be discerning
Using technologies can be tricky because they can bring unexpected or unintended negative effects. In 1930 chemist Thomas Midgley, working to improve refrigerator safety and efficiency, developed CFC based refrigerant – which made fridges safer and more reliable, but as we now know, caused significant damage to the earth’s ozone layer which protects us from harmful UV rays.

The unintended effects of technologies mean that we need to take care to be discerning about the technologies we use and the ways we use them. Tim Challies (The Next Story: Life & Faith After The Digital Explosion, Zondervan, 2011) suggests Christians should exercise ‘disciplined discernment’ about technologies by looking carefully at the new realities, educating ourselves and thinking deeply about potential consequences. Some questions we can ask ourselves include: is my use/development of this technology likely to harm people or the world, and are its intent and outcomes consistent with God’s purposes in the world?

Prioritise relationships and support human flourishing
God made us and this world for us to enjoy in relationship with him and each other. So, another good question to ask of technologies is whether they promote good relationships and human flourishing. Grace Hopper, the woman whose ideas transformed computing, is quoted as saying she felt her greatest contribution was developing the potential of young people. Let’s consider how we can use technologies for the good of others. Let’s use social media to build others up rather than tear them down. Let’s be more aware of those we intentionally or unintentionally exclude in our use of technologies. Let’s use technologies creatively to give glory to God, promote justice and righteousness, helping those around us to grow in their relationship to God or helping and to see the reality of God’s creative goodness in the world around them.

Written by Diane Hockridge, Ridley College Faculty member, working primarily in online educational design. With thanks to David Hockridge, IT and Data expert, for many of the examples in this article.

We respectfully acknowledge the Wurundjeri People, who are the Traditional Owners of the land on which the Ridley College campus is built.
Ridley College is an affiliated college with the Australian College of Theology, CRICOS Provider Code 02650E.
© 2022 Copyright. All Rights Reserved.