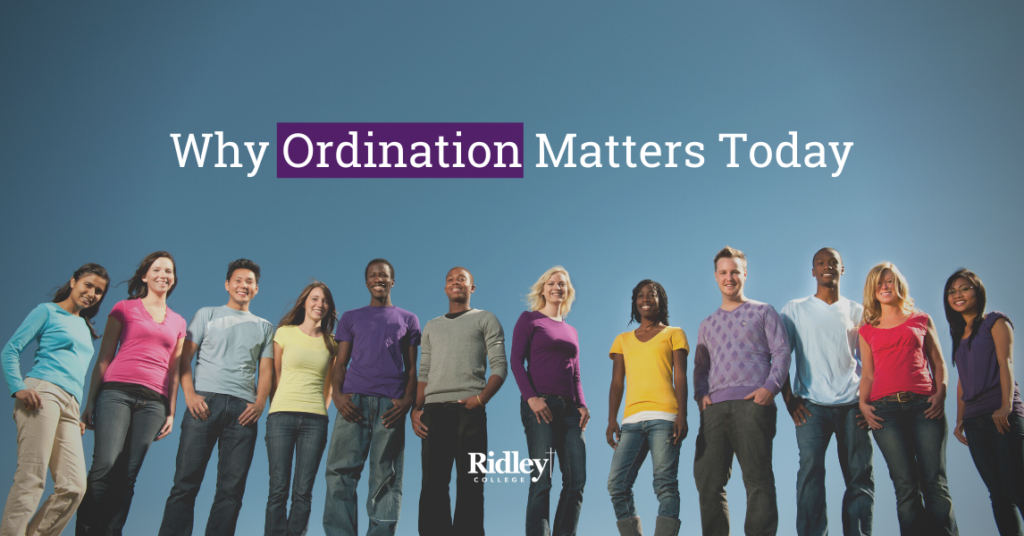 Living as a Christian in our world is tough. So now is exactly the right time to think about offering for ordination in the Anglican Church.

Throughout the Scriptures, God blesses his people by giving them the gift of leaders, especially when the conditions around his people are adverse. A church with a pastor is a church that God is reaching out to care for. As Peter explains, local pastoral leaders are God’s undershepherds (1 Peter 5:1-4). Shepherds with their crook are exactly what a church needs when dangers are afoot. God gives leaders to his people to teach them wisdom, or to bring them back to his Word, or to create a spiritual home where they are nurtured in assurance. And God normally does this through groups of leaders working together (Titus 1), with some particularly gifted people as a focus of authority. When Jesus addresses the seven churches in Revelation 2-3, he never rebukes them for having leaders, just for having leaders who have failed in their tasks! The New Testament assumes that a church has leaders who should be respected as sent from God (Hebrews 13:7, 17). Jesus himself asks his disciples to pray that God would raise up workers for the harvest.

And all around the Western world, the Anglican church is in desperate need of leaders. We don’t have enough of them. Every week, I get emails and calls asking me to suggest names of men and women who can serve in local Anglican churches in Melbourne and beyond. Perhaps as Anglicans, we have assumed that leaders will emerge spontaneously because they always have in the past? Perhaps parishes assume that the theological colleges are doing that job, and colleges assume that the bishops are doing that job, and bishops assume that the parishes are onto it? However it works, we haven’t been intentional enough in spotting, training, mentoring, recruiting, and sending a new generation of leaders into ordained ministry. Indeed, in the UK, the US, and Australia, we have been reducing the standard required of our clergy in order to fill the available jobs quickly. But this will only make the task more difficult down the line, when those who have been less well prepared have less capacity to train and prepare those coming after them.
So I say to whoever is reading this, we need more people putting up their hands today to serve the Anglican church, no matter where you are.

‘Different denominations do it in different ways, but it has been part of the Anglican heritage that authority is best expressed in predictable and patterned ways. That is what ordination delivers.’

Some might push back and argue that the New Testament doesn’t include a script for ordaining leaders, that this is something that Christians invented long after the exciting days of the early church were past. Of course, it is true that the apostle Paul never affirmed a liturgy for ordaining Anglicans – there was no Church of England when he wrote! But there are plenty of clues in the New Testament that setting aside leaders to pastor a flock was God’s intention. Timothy and Titus are sent to be ministers in local congregations. The laying on of hands is attested in several places, structures for stability in a local church are outlined, and discipline has to be exercised by someone with authority to do just that. Different denominations do it in different ways, but it has been part of the Anglican heritage that authority is best expressed in predictable and patterned ways. That is what ordination delivers.

The Anglican Church is a fantastic place to do Gospel ministry. It is a Protestant church, which makes grace the priority in working out what ministry is all about in the first place. This was the great insight during the Reformation that the church does not dispense grace like a substance, but that grace gives birth to the church in the first place! According to Article XX, the Scriptures stand over the church, and it is the job of its ordained leadership to explain and apply the Scriptures, along with overseeing a ministry that includes baptism and the Lord’s Supper, those means of grace that preach the Gospel through water, bread and wine. But the Anglican Church is a Protestant church that grew out of the medieval church, reminding Anglicans that God had been at work in the world even when Christian leaders had previously erred, as Article XXI is quick to teach. Anglicans have a sensibility that teaches us to appreciate the church’s role in history before the Reformation and to value the church’s role in the life of the nation around it. We not only preach justification by grace through faith and are trained in the same through weekly church services, but we also stand with brothers and sisters throughout the ages in affirming our faith in the words of the Apostles’ or Nicene Creed. This makes for healthy ministry: a clear Gospel focus combined with a large vision for God’s work in the world.

‘People who survive in ministry are leaders who prepare for the long haul by laying solid foundations.’

Our world generally needs leaders who can handle complexity with clarity and convictions, and this is doubly true of the church. The Anglican church has always prized a learned clergy. We need leaders who are well trained in handling the Scriptures (even in the original languages) because the Reformation taught us that relying on commentators alone to understand the Scriptures can be perilous. We need leaders who are not just pragmatists, doing what works, but instead can think from first principles to adapt well to new situations and conditions through applying themselves to theology and church history. We need leaders who are well-trained in reflecting on their practices and can draw others into that reflection as well: our leaders need to devote themselves to learning the skills of pastoral care, evangelism, preaching, liturgy, and church-planting. People who survive in ministry are leaders who prepare for the long haul by laying solid foundations. Why start building a tower without working out first how to make it stay up?

Having been around for five hundred years, the Anglican church has learnt some good lessons in creating sustainable patterns of ministry. We have structures where authority is dispersed, that is not just in the hands of one person. We have structures of accountability so that clergy and laity work together. We have structures of support so that clergy have space to work collaboratively with other clergy nearby. We have structures like the parish designed to reach the whole nation for Christ, and others like chaplaincy to reach into those corners of society which otherwise might miss out on the care of the church and the witness of the Gospel. It is not that leaders in the Anglican church can’t experience burnout or loneliness, but at least there are patterns which attempt to work against it.

And we need to be reminded that it is OK to want to pursue the possibility of ordination. We may not like tall poppies in Australia, but Paul explains that it is perfectly acceptable to aspire to be an overseer (1 Timothy 3:1) to desire a noble task. Wanting to be a leader in a local congregation doesn’t invalidate your dream. It is great to feel called to this ministry role, and indeed this might be the way you get through hard times in ministry. The Anglican church is a great place to offer Gospel leadership, despite contemporary challenges and the difficult debates within the church concerning sexuality, which has split the Anglican church in several countries. But the way to respond to a church with fault lines is not to ignore its failings but to offer your service to bring pastoral leadership to bear on its challenges. Though we need more, God keeps raising up outstanding leaders for the Anglican church, for which I praise him.

Why not speak to someone today about your future in leadership?