Home / Resources / Why Hot Desking might be bad for you

Category: Faith in the workplace 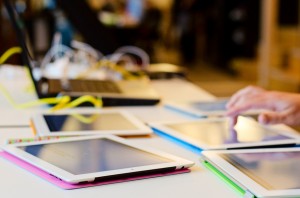 The workplace is undergoing a transformation. A revolution, that some suggest, is even greater than the Industrial Revolution. [1] But is every change for the good? Andrew Laird (Dean, Marketplace Institute) reflects.

This article was first published on the Life@Work website.

We are now deep in the Information Revolution, and with it questions are being asked about everything from when, how and where we work. We can seemingly work anywhere and at anytime. Where once our work might have been tied to a field or a factory and an activity that we did in that space, now our daily labour is attached more to ideas which can occur in any place and at any time, and can be recorded, communicated and shared with the click of a button.

The implications of these changes are massive. For Christians, the changes demand our reflection, and where appropriate, we offer words of caution or encouragement. One such area is the office space. How might Christians respond to some of the changes being made to where we work?

Two recent trends in workspaces are Hot Desking and Co-work Spaces. Both are borne out of the Information Revolution (the flexibility to work anywhere). However both models treat people very differently. You might say one model dehumanises, while the other humanises, the worker.

Hot Desking (or “Activity-based workplaces”) are office setups where individual employees no longer have their own desk or office but can set up and work from various different points within a building, depending on the type of work that they’re doing. Each evening the employee simply gathers up all their belongings and packs them away in a locker, returning in the morning to retrieve their belongings and set up again for the next day in whatever space is most suitable. Among those adopting the practice in Australia: NAB, CBA, Macquarie Bank and Microsoft.

Speaking to a Christian friend recently he reflected upon this change in his office. On the one hand he appreciated the benefits of being able to move and work in a space that was best suited to the task at hand. The great strength of this model is its recognition that not all work is best done in the one kind of space. Sometimes we need people all around us; other times we need private space. Sometimes we need to sit around in a circle; other times along a bench.

However there was a dangerous downside that he had already observed. My friend made the observation that such a model of workspace can be very depersonalising. No longer do you have a place that is yours to make your own. This may seem a small thing, but my friend is not alone in feeling this. As one writer has observed, “Hot-desking may contribute to a sense of loss and marginalisation thus negatively impacting mental well-being.” This is because humans have been wired to need connection to places.

From the beginning humans were placed in the Garden of Eden, a physical place. Punishment because of sin saw dislocation from this place. The promise then came of God forming a people in a place (Genesis 12:1-3). The Promised Land was the first taste of this; exile and removal from the land the consequence again for rebellion. Now those in Christ look forward to the final place God has for His people: the new heavens and new earth. We are wired to need to be connected to places; when this dislocation happens we feel “a sense of loss and marginalisation”.

Further my friend had noticed that when someone was fired their departure could go almost unnoticed – no empty place where they once used to sit every day. Such a model has the potential to be very isolating, dislocating us from places and people, and as such can be quite dehumanising. For as people made in the image of a relational God, and made to be connected to places, being connected to people and place is an important part of being human.

Compare this to the Co-work Space. A recent podcast, Alternatives to the office explored the growing phenomenon of these type of spaces, where different people doing different jobs nevertheless all work together in the same space, with access to power, Internet, coffee and meeting rooms.

Hub Australia is one of the leading providers of such spaces in the country. Their CEO Brad Krauskopf explains that the rise of such spaces is due in part to the Information Revolution, but also the GFC where many workers moved into the so-called “freelance economy”. Unable to afford office space they begin to work from home or remotely. But in a telling statement, Krauskopf reflects that, “As soon as everybody had their independence and started working alone, the first thing that they did was to start to work together”. [2] Such an observation is a reflection of that hard-wiring that we all have for relationship and people, as people made in the image of a relational God.

Further, Co-work Spaces provide that need for place, a regular space that we inhabit, while still embracing the benefits of the Information Revolution (flexibility in where we work). Many who use such spaces testify to the enhanced creativity that such a space fosters, not bound by the constraints of a traditional office set-up that really is modelled more for the Industrial, rather than Information Revolution.

Of course there is much more that could be said about both these types of spaces. For many businesses both may be unrealistic models to adopt. Nevertheless, perhaps the question that Christians need to have at the forefront of their minds as the workplace is transformed by the Information Revolution is, in what ways are the changes dehumanising people? Or, how might the Information Revolution be harnessed in ways which humanise the worker? Because as Christians we believe that humans are more than simply depersonalised cogs in a machine. All humanity has an inherent dignity. And part of human dignity is expressed in terms of our relations to people and places. Any changes that we make need to take this into serious consideration to ensure this dignity is not lost.