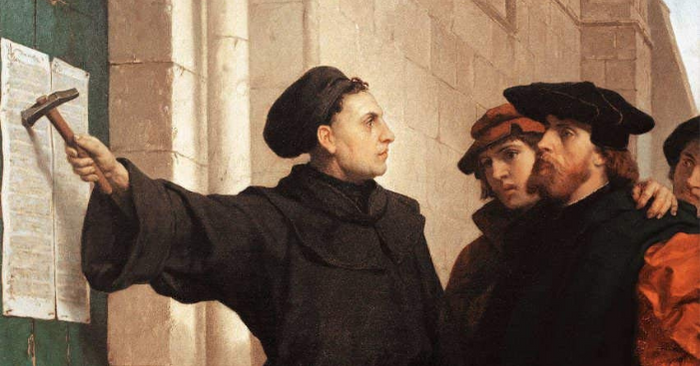 This article was written by faculty member Rhys Bezzant and first published on the Gospel Coalition Australia website.

Sometimes the old guys can forget what it was like to be young. Looking backwards, there is often a clarity about why life turned out like it did, but amnesia about how grey things looked in the middle of making hard decisions. Martin Luther is a case in point, as he looked back on his life and ministry around 1545 from the perspective of someone about to die, feeling overlooked and certainly encircled. The next generation was calling the shots, and he was safe only in Saxony, endangered if he set his foot in the next principality. In his mind, his great theological breakthrough had been a clean break from the late medieval church. In his recollection, understanding the righteousness of God as gift and not demand was a great turning point. He even said that it was like walking through the gates of paradise. And besides, all the cool guys like the apostle Paul and Augustine of Hippo had had dramatic encounters with the Lord, and he wanted to join their club. Is it likely that his arguments about Christ alone, grace alone, faith alone, and Scripture alone, had all come to him on waking up one morning?

No, I think Luther (or “Luder” as his surname was originally spelt) only gradually arrived at these theological, systematic conclusions. In his childhood his parents had inculcated in him a profound terror of Christ, so his mentor in the monastery in Erfurt, Johannes Staupitz, encouraged him to read the Bible to find there a Christ of mercy. Consequently, his early years in Wittenberg were spent studying the Scriptures and the Church Fathers, and teaching at the newly minted university—both of which proved to be profoundly formative. By around 1513, he had finally come to see Christ as a friend of sinners, and also as the key to understanding the Scriptural story line. Indeed, he no longer read the Bible to find answers to philosophical questions about morality or future hope; now he read the Scriptures to meet Christ directly in his heart, for Christ alone could be his consolation. If Christ is for us, who can be against us?

In Luther’s day, the assumption was that the church was like a stock exchange for trading merits. By offering good works, perhaps a pilgrimage or payment for an indulgence (a certificate to recognise that the temporal consequences of sins could be mitigated), our acts of charity might be credited to my spiritual account or someone else’s through the mediation of a priest. Having experienced the closeness of Christ in the Scriptures, he came to realise that the church was not the place to commodify sins or good deeds, but rather the place where we might hear God’s promises and celebrate his presence. The church was at many levels corrupt, but God’s grace alone was powerful enough to cover them all and offer a fresh start. It was not penance before the priest that could salve the guilty conscience, but true repentance from the heart. No wonder Luther wrote in 1517 (500 hundred years ago this year) a series of statements for debate, known as the 95 Theses, which asked the question where true grace was to be found.

Glory vs Cross
For his efforts, Luther was harrassed and mocked, and was summoned to various debates to justify his views. In April 1518, he appeared in Heidelberg at a meeting of his Augustinian order, where he argued that scholasticism (a kind of medieval philosophy) was robbing the cross of Christ of its power, and he described those who loved human reason “theologians of glory.” He would rather be a “theologian of the cross,” and not explain the reason for Christ’s death philosophically, but accept it by faith alone. The point of theology was, for Luther, not to smooth out all issues in human experience, but to teach us to accept God’s offer of forgiveness through the merits of Christ’s atoning work. He was growing increasingly suspicious of appeals to human reason to solve theological debates.

In Augsburg the same year, he was called to debate a papal emissary named Cajetan, who was however no match for Luther’s wit and growing popularity. After all, Cajetan was an Italian, and at this point in history, because German church taxes were being sent to Rome, Italians were not greatly respected here. Luther managed to steer the debate towards the question of indulgences and the canon law, and raise again the question of the nature of grace, but now with questions of authority attached, raising concerns about the distinct legal basis of the church. Up to now, Luther’s challenge concerned itself with academic theology. Now it became apparent that grace alone and faith alone were provoking more fundamental concerns about the church and its place in society.

Eck Attacks
Authority was again on the agenda in Leipzig in 1519, when Luther debated the German Eck, who was whip-smart. He connived in their public debate to force Luther to admit that he was like Jan Hus, a fifteenth century teacher from Prague who had been declared a heretic for holding views not so different from Luther’s. Not only that, but Eck got Luther to admit that the pope could make theological mistakes and so could the councils of the church! It was like Luther was burning down all the theological authorities of his world, being left with the Scriptures alone as his highest authority. A few years later in 1521, Luther confessed before the German Emperor Charles V in Worms that he could not go against his conscience or the clear teaching of the Scriptures, but as early as 1519 this had become his deepest conviction. He had learnt from the humanists in various universities in Europe not to receive just the latest authority as the final word in a debate, but to go back to the original sources and get into the mind of the ancient authors to provide perspective in matters of disagreement. Being snookered by Eck, he learnt this lesson well.

Consolations
Through a period of personal crisis and intense debate, Luther had come to see that his renewed understanding of the Gospel was grounded in these great “solas,” that is through Christ alone, grace alone, faith alone, and Scripture alone. These provided him with the lens by which he might clearly grasp the plans and purposes of God, and track the big themes of the Scriptural witness. Along the way, he had developed a whole series of new insights into the nature of salvation, and together they constituted his great breakthrough. No wonder, then, that it was in 1519, after such an extended period of reflection, that Martin changed his surname from Luder to Luther, so that it might better rhyme with and conform to the spelling of the Greek word for freedom! Of course it was not that grace or faith were first discovered by Luther. These categories had long been debated within the medieval church. Luther just discovered how important it was to use them like Paul had done, to clarify their relationship to each other, and only then to build on them an experience of assurance. They were like protective walls which defended an experience of grace and the proclamation of the Gospel.

So Luther might not have woken up one day to articulate his Protestant agenda in one single moment. But he did wake up one day and look back to his youthful self, and stand amazed at God’s generosity towards him in Christ. His theology was hammered out through real battles with theological opponents, so his grasp of assurance, like often in pastoral ministry, came slowly. Approached in this way, we understand his insights as apologetically motivated, for we get to see what each “sola” was pitched against. He taught justification by faith, but this was just the tip of the iceberg. Below the surface was a whole new way of doing theology. While each of these “solas” excluded things, in his own experience they resulted not in a loss but a gain. Luther had found deep assurance that he was safe with God. With the Lord, he was never alone.