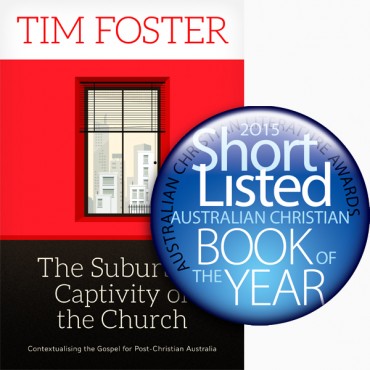 A tale of two blogs

Since the publication a year ago of my book The Suburban Captivity of the Church I have benefitted from at least a dozen book reviews. I think it would be fair to characterise these as largely positive, with some helpful criticisms being raised and perspectives offered. Examples include those from Mike Frost (Morling College), David Burke (Christ College, p15), Tess Holgate (Bible Society/Eternity), and Simon Carey Holt (Collins Street Baptist). This week two further reviews were published, one by Craig Tucker (Gospel Coalition) and Mark Earngey (Thinking of God). I hope to respond to Craig’s thoughtful and generous review very soon, as he has given me pause for thought on a couple of areas, and further dialogue would be fruitful.

The review by Mark Earngey was the first really damning review I have had. I don’t mind criticism, and I am up for a debate on such vital matters, however I have found his review difficult in a number of respects. At several points I have been misrepresented, with half sentences, or even just a couple of words being quoted without any context, and aspersions being made that are not warranted. As the vast majority of Mark’s audience will not read the book, but will form an assessment of my theology and character based on his review it is a little disconcerting.

Mark begins with the claim that I denounce “conceptions of the Gospel that center upon the sacrifice at Calvary.” This is a serious accusation, especially when he offers no references to support this charge. Several statements in my book would contradict this assertion, such as my description of the saving work of God which, “comes to a climax in Jesus’ death which is interpreted within the New Testament itself in numerous ways. The cross was the means of God fulfilling his covenant, defeating the principalities and powers, destroying the power of death and evil, forgiving sin, redeeming slaves, abolishing the law, reconciling Jew, Gentile and all things, bringing life to all, and supremely revealing the love of God” (p. 18). Reframing the gospel around God’s purposes does not marginalise or undermine Christ’s work the cross, and it is certainly not denounced in my presentation.

I am also troubled by the claim that “Foster staggeringly describes this [Christ’s glorious work of satisfaction] as ‘a subsidiary question’”. Apart from the adverb which serves only to generate emotional heat, the review does me a disservice by quoting only two of my words which has the effect of misquoting me. What I say is that “the question that drives the biblical narrative is: how is God fulfilling his purposes for the world…Humanity’s plight is still a question, but it is a subsidiary question.” I say nothing here about Christ’s glorious work being subsidiary, but in an effort to produce a more theocentric gospel (as opposed to a human-centred one) I see Christ’s work as driven by God’s purposes rather than humanity’s plight. Mark’s misrepresentation here is also quite serious.

Mark identifies as my first major weakness my starting with anecdote and utilising strawman arguments. He further states that I have “a vague and ambiguous target in mind”. He does not explain why starting with an anecdote is a problem. As I am writing a book, not a dissertation that a professor is paid to read, anecdotes are a way of engaging the intended readership. Rather than being the first proposition in my argument, this anecdote serves to explain why I began asking the questions that led to this book. There is nothing illogical or fallacious here. Nor does Mark show how I create a strawman. A strawman is a caricature that is inherently weak and easily dismissed. His ability to correctly identify the evangelism tool I was using would seem to contradict the assertion that I am being vague.

The reviewer then concerns himself with my apparent presentation of a “false dichotomy” (emphasis mine). It is certainly true that I establish is a dichotomy, but it is not shown to be “false”. A false dichotomy is where a person sets matters in contrast which are, in fact, not. But there is nothing inherently wrong with a dichotomy.

I will need Mark to explain his point about Goldsworthy a bit more fully and offer a reference in support of his argument. Graeme is one of my most formative influences, but when I consult the indexes of four of his books there is no entry for “cross” or “atonement” (but at least, unlike me, he has an index!). Browsing through the volumes I can see one paragraph with a rather general comment about the atonement, but otherwise there is not a great deal said.

Mark’s comment that I offer “few positive words concerning Christ’s glorious work of satisfaction for sin at Calvary” gets us to the heart of the matter. Of course, I have much to say about the cross, and am constantly in awe of its achievement. Certainly the satisfaction of God’s wrath does not have the emphasis that Mark would give it, but that is exactly my point since the burden of my argument is that avoidance of divine wrath is not the central organising principle of the gospel. That is not to say that God’s wrath, Christ’s propitiation and final judgment have no place. Not at all. However, for this criticism to stand Mark needs to show that satisfaction of God’s wrath is the central gospel motif, and that the punitive framework is the right one.

I find Mark’s comment about what Dr Morris might think of my book unhelpful as he seems to be casting aspersions rather than advancing an argument. In the pages Mark references Dr Morris makes the point that “While the many-sidedness of the atonement must be borne in mind, substitution is at the heart of it.” He then uses “substitution” quite broadly and as such his argument could be extended to include Christus Victor (ie. Christ fought evil for us). Interestingly Dr Morris frequently cites positively the modern exponent of Christus Victor, Gustaf Aulen, calling him “a great scholar” (The Cross in the New Testament p. 241, n. 85).

Mark then raises the issue of my confusing the “root of the gospel with the fruit of the gospel”. However, I make such a distinction in the very paragraph he quotes where I distinguish the gospel and the call of the gospel. I say that “the gospel is the announcement that God’s purposes are being fulfilled; that the old world order is finished and his new order (which is called ‘the kingdom of God’ in the Bible) is arriving in the life death and resurrection of Jesus”. I would have thought this was a reasonable attempt at capturing Mark 1:14-15. Then I say, “The call of the gospel is to believe that this new order has arrived in Jesus, and in believing to live according to this new way in the power of the Spirit” – which is a way of saying faith and repentance. What the gospel is, and the response it evokes are appropriately separated. What’s more, as I point out, we do not elicit faith and repentance by our own efforts, but in the power of the Spirit.

Mark then questions my historical accuracy and claims that I ignore the fact that evangelicalism predates Clapham. I never claim that the Clapham sect distorted the gospel, nor that evangelicalism was founded by the Clapham sect and so once again find myself being misrepresented. What I advance is the argument that the Clapham sect has shaped a domestic ideology that dominates the evangelical vision for life, and which produces an alignment between evangelical ideology and suburban aspiration. I provide considerable evidence for this claim, drawing on a range of primary sources and support from secondary literature. Mark does not address this evidence or supply any of his own to the contrary.

When we come to Australian evangelicalism Mark takes exception to my charge that “from the very beginning the evangelical church in Australia gained legitimacy by serving the interests of the powerful at the expense of the poor and disenfranchised”. He does not show that there is anything historically inaccurate in my account in support of this serious claim. I appreciate that he provides some evidence here. Yet, at best he could argue that I have ignored the positive contribution evangelicals have made to serve the interests of the poor and disenfranchised – a point I would concede – but there is nothing inaccurate about my history. The point of that section, that evangelicals repeatedly sided with the authorities against the working class, is supported by evidence documented in the book and does help account for the gulf that exists between evangelicals and the working class.

Mark concludes with a reminder that the “Old Testament prophets looked forward to the one who would be ‘pierced for our transgressions’ (Is. 53:5). The New Testament apostles saw the wisdom of Christ crucified (1 Cor. 1:23).” I take it that this is another piece of rhetorical flourish, but my concern is that it implies that I think otherwise. Of course, I do not. Indeed, the folly of the cross is the hallmark of the upside-down new order that Christ’s death inaugurates. God’s means of inaugurating his kingdom tells us a great deal about the kingdom itself. While agreeing with Isaiah and Paul, I can’t agree with Mark that, “The Oxford martyrs died for the atoning sacrifice of Christ.” Politically they were condemned for insurrection in supporting Lady Jane Grey over Mary, and theologically they were tried for their failure to recant their views on transubstantiation and the sacrifice of the mass (see the entries under ‘Cranmer’, ‘Latimer’ and ‘Ridley’ in Biographical Dictionary of Evangelicals, IVP, 2003).

I do find it a little ironic that Mark’s review was published on a site that states that one of its values is unity. I know that unity cannot be divorced from truth. If it is not possible to search for truth with fellow evangelicals who share a commitment to Scripture and mission without casting aspersions and provoking disunity then we have a very serious problem. Sadly, this exchange and the remarks it provoked on Facebook alert us to the fact that we do have a very serious problem. I do hope that we can engage, and even disagree, in ways that will better promote both truth and unity. Craig Tucker’s review is a great example of how to do that. I look forward to doing him the courtesy of a response.