Now that you’ve worked out the big idea, it is time to decide how to structure the sermon.

a. Why is structure needed?

Preaching professor Haddon Robinson once quipped, ‘If it is a mist in the pulpit, it’ll be a fog in the pews.’ How true is that! If the preacher is unsure of their big idea, and fuzzy about how to get there in the sermon, the hearers will have no chance of understanding. We’ve all sat through sermons where the preacher’s ideas and structure were so unclear, that by the end of the sermon we couldn’t see our hand in front of our face. How often have we replied to the question,’What was the sermon about?’ with ‘I don’t know, I kind of got lost and starting thinking about what to have have for lunch.’ And I have certainly had the experience as a preacher of thinking, ‘Wait, what’s my point? Where am I going next after this point (logically speaking)?’

So a structure or an outline of your sermon is needed because it provides the blueprint of your sermon. It brings clarity to both you the preacher and to your hearers. Firstly it does a service to your hearers by illuminating the passage for them. For most people in our culture, the Bible is not always clear. Your sermon structure helps guide them to the truth which is sometimes veiled by the difficult words, unfamiliar history, genre, logic or cultural background. The function of an outline is not to point to itself and show how clever the preacher is, but to open up a Bible passage to the listener. It is a way of providing “markers” or “hooks” which help listeners understand the logic of the sermon and enable them to be oriented and confront God’s word for their own lives.

Secondly, structure helps me the preacher by providing a logical path for my mind. It allows me to see the sermon as a whole, and it helps me clarify the relationships between each of the parts of the sermon. It helps me recognise places in the sermon that require additional supporting material. Structure provides confidence because the preacher feels like their thoughts are ordered. It also gives the hearer confidence that the preacher has done the thinking and preparation and is a sure guide.

Well how do you decide which structure to use? There is actually no one right structure to communicate your big idea. There may be a few different routes to guide your hearers. Just like when you plug your destination into Google maps, it often offers you multiple routes to get there. After you’ve done your preparation and worked out your big idea, play around with some possible structures. Then pick one. Your choice is influenced by what suits you the preacher, what what fits your audience, circumstance, sermon length, and genre of the text. It is also a bit of a balance between clarity (what brings the most clarity) and creativity (which structure is interesting).

The two main structures which sermons can take are

(i) Deductive sermons, as mentioned, state the big idea at the beginning and then deductions/’support’ from that idea are explored. The shape for example might be something like this:

I’m sure you could come up with a more concise and snappy way to phrase the three points of the body above, but regardless, the points should be learning points, not just descriptions.

Some benefits of the deductive structure is that it is clear and memorable, so it’s a great approach for hard passages such as the dense teaching of some Pauline texts. It is also a great structure to use for new preachers. A drawback is that it can be boring if a preacher uses this method too regularly. It also doesn’t suit some passages (e.g. some parables). And for really familiar passages it can lead hearers to switch off because the deductive method is basically “ Tell them what you’re going to say, say it, then tell them what you’ve said.”

Great examples of deductive preachers are John Stott (formerly All Souls Langham Place), Richard Trist (Ridley College, Melbourne), and here is a link to an example of an expository sermon with clear points, a simple structure, and great use of illustrations from Erica Hamence from St Barnabus Broadway in Sydney.

You will note that Erica makes her big idea at the start, tells her three points, then makes her way through her three points. You can do this, or just state the big idea, then reveal each point as you go along.

By the way, you don’t have to make three points! It depends how many you need to make your big idea persuasive. One point may be sufficient for your passage. But more than three is too many. People will not be able to remember them and tire of listening (no matter how good a preacher you are).

(ii) Inductive sermons are the opposite – the sermon is introduced (often with a question or a problem), and then various points are unfolded – scene by scene as it were – building on one another, with the big idea of a sermon revealed at the end.

An inductive version of Jonah 3 might go something like this (remember that the big idea is the same as above).

The key to this type of sermon is the transitions. Because the congregation does not have a central idea already stated, they do not have an outline and thus transitions are even more important to link each section and lead to the end.

The key exponents of this approach – sometimes called the “new homiletic” – are Fred Craddock and Eugene Lowry. The approach is also called Narrative Preaching. Inductive preaching often comes in the shape of Lowry’s Loop (see diagram below). The climax of the inductive sermon outline is the AHA and WHEE stages. 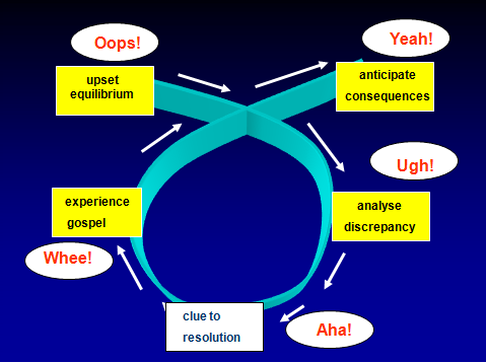 An easy starting point for more on the inductive approach is here. This link also includes a further link explaining Lowry’s loop.

Some benefits of the inductive approach are that it creates tension and intrigue, and leads the hearers on a journey of discovery for themselves. It also follows the gospel pattern of Bible stories and the Bible as a whole. The drawback is that it can be more difficult for new preachers, and demands more of the listener to follow where you are going.

There are quite a few inductive preachers these days. For some biblical examples see Peter’s sermon at Pentecost, and Paul’s sermon in Athens. Local Melbourne preachers who often preach like this are Paul Barker and Peter Adam, and Hannah Craven. Listen out to your next preacher at church to see which method they are using. Many preachers employ a mix of methods, sometimes deductive, at other times inductive. In actual fact, you can even preach a deductive sermon in an inductive way.[1]

(iii) For either approach to structure, you need effective transitions. These notify the audience that you are moving on and should be planned in advance and written into the sermon. They help listeners separate the main points from supporting material. They can be as simple as ‘firstly, secondly, thirdly’ or ‘let’s unpack this a little bit further’ or ‘can you see here the three ways that Paul is describing believers? – who we once were, who we now are, who we one day will be?.’

Good sermon outlines will display unity – each point relating to the big idea of the whole sermon; and progression – each point takes the sermon forward rather than simply repeating the same idea just made. There are also times when harmony to your outline is helpful, which can be achieved through some sort of pattern to your major ideas (such as the example in the previous paragraph), though the practice of making all your points rhyme or start with the same letter seems to be passé! Lastly, it helps your audience if you give roughly equal time to each section of the sermon, though there may be times when a point requires a little more time than others.

So, developing the structure of a sermon is not easy, but it is important. Having your big idea and a memorable outline that you are happy with helps makes the process of writing the rest of the sermon quicker. It also makes your sermon delivery easier because you’ll know exactly where you are heading and how you are going to get there. Have fun with structures!

1] For an example of how to integrate the two methods see Donald Sunukjian, “Preaching Inductively and Deductively”, Christianity Today http://www.preachingtoday.com/skills/themes/structure/200007.10.html