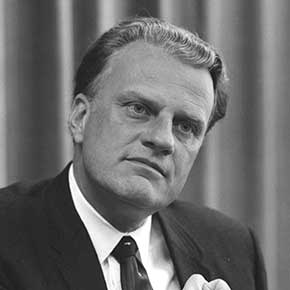 Ridley College today remembers the life and ministry of Billy Graham with great thankfulness as we acknowledge his death at the age of 99. His impact on world evangelicalism is enormous, having preached to more individuals than anyone else in history, with a clarity that came of deep conviction and persistent labour.

Our College hosted the planning meetings for his Melbourne Crusade in 1959, as our Principal at the time Dr Stuart Barton Babbage was its Chairman. These events were the closest Australia has ever come to revival, and in the early 1960s Ridley’s numbers swelled with students who, during Graham’s visit, had been convicted by the Lord to offer for service in the church. Indeed, the Leon Morris Library holds the telegram which Graham sent to Australia to accept the invitation to organise a Crusade, and he gave a gift to Ridley at the end of his tour which assembled in scrapbook form all the newspaper clippings published about his preaching and events.

Unlike many American evangelists, he avoided sexual and financial scandals, and was confidante to presidents and monarchs. Once when he was asked if he would do anything differently if he had his time again, he replied, “Preach less and study more.” He also warned us that when one day the world hears that he has died, we should not believe it, for, at that moment “he would be more alive than ever.” Wonderful words of reassurance and hope! We praise God for giving to us such an effective servant of the Gospel.