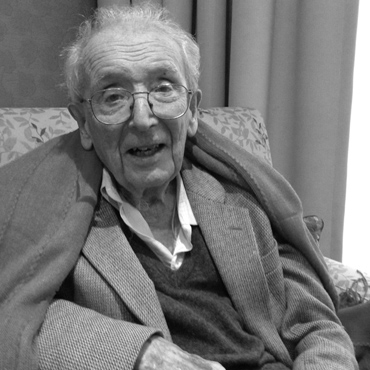 John Moroney was converted by Baden Gilbert, vicar of St Barnabas’ Montague, South Melbourne, and became actively involved in Crusaders and the CMS League of Youth. He served in the War, then trained at Ridley and was made a deacon in 1949 and ordained Priest in 1950 in Melbourne.

He died recently at the age of 96, and was a remarkable minister, mentor, preacher, pray-er and pastor.

I am very grateful to God for John’s life and ministry. I met John first when I was 13, and went to Holy Trinity Williamstown for two Sundays to play the organ, as the organist was away. This became an annual pilgrimage. It was through one of these visits that I met Harrie Scott Simmons, who was visiting Williamstown to preach one Sunday in 1963 when I was playing the organ. Harrie and John were long-term friends. Harrie and I travelled back from Williamstown in the train together, and he invited me to visit him that week. He opened the Bible, explained the gospel, and I was converted!

John Moroney then moved to St Columb’s Hawthorn in 1965, where I had more contact with him. My mother, recently converted, went to St Columb’s, and soon took charge of the Sunday School at the branch church, St Aidan’s Auburn. In my last year at Ridley before I was ordained, I served at St Aidan’s, and ran the youth Bible study.

John was an excellent preacher. He would select one verse from the Bible passage, and exegete, expound, and explain it with clarity, power, emotion, passion, and pastoral sensitivity. I still remember his sermon on ‘Seekest thou great things for thyself? Seek them not’. He engaged deeply with the text of the Bible, and engaged deeply with the congregation. And the power of his preaching came not just from his words, but was energised and enriched by his integrity, and by his pastoral ministry. He was the outstanding preacher of his day.

In those days, the minister took the whole service as well as doing the Bible readings. And John’s preparation and praying of the liturgy was exemplary, as was his reading of the Bible. John was also a patient and persistent pastor, and could engage personally with all his parishioners. He had a great ability to relate well to all sorts of people, and was especially pastorally effective with the weak, the sick, and the elderly.

John was also actively engaged with the diocese. For many years he was the only Evangelical Examining Chaplain, and the only Evangelical Archdeacon. In this work he was patient, pleasant, and cooperative, but uncompromisingly Evangelical. As the only Evangelical in the system, and especially as an Examining Chaplain, he acted as an informal Bishop for Evangelicals, finding opportunities for ministry for them, mentoring them, and encouraging them. He also served as an army chaplain, and was the Senior Chaplain in Victoria. He was a member of the Ridley College Council, and served as Acting Principal in 1963 when Stuart Barton Babbage left and before Leon Morris arrived. He was strategic in the appointment of Leon Morris.

He was an energetic minister of the gospel of the Lord Jesus. He was a man of prayer, and after he retired in 1986 would spend two hours a day praying for people to whom he had ministered.

He was a great mentor to me when I was thinking about being ordained, and when I was a Curate. He was sympathetic, patient, and wise. And he certainly was an inspiration for my early preaching. And I know that he continued to pray for me regularly for over 45 years.

His funeral at St Mary’s Caulfield on 30th October was a joyful occasion. Not many 96 year olds have a packed church for their funeral! There were so many people present who were thankful to God for John and his ministry. The service was well prepared and led by Rowan Fairburn, and Mark Durie preached an excellent gospel sermon, honouring the Lord Jesus Christ, the resurrection and the life.

I thank God for John Moroney, faithful servant of Jesus Christ, and a good and godly gospel minister.