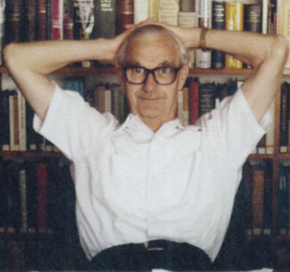 Remember your leaders. Consider the outcome of their way of life and imitate their faith.

2014 is the centenary anniversary celebration of Leon Morris’ birth. For those who don’t know – and you all should- Leon Morris is arguably Australia’s greatest biblical scholar. Morris is best known for his masterful works on the biblical teaching about the atonement as well as studies on the Gospel of John. Morris was also principal of Ridley College from 1964 to 1979. You can read more about him here.

In honour of Leon Morri’s memory and his legacy in evangelical biblical scholarship, Ridley Melbourne is celebrating his centenary in several ways:

First, throughout the year we will have  number of scholars featured on the Ridley Blog  writing about their memories of Leon Morris and reflecting on the significance of his contribution to biblical studies. The first blog post is by the current Ridley principal Brian Rosner. He writes:

At a time when evangelical biblical scholarship was at best marginal, Leon Morris attained a worldwide reputation as a New Testament scholar of the first rank.  With a Cambridge PhD, he was the first Australian to be elected to the international scholarly Society for New Testament Studies.  He was one of the first wardens of Tyndale House in Cambridge, was a translator of the NIV Bible, and gave visiting lectures in colleges around the world. Morris was a prolific author.  He wrote more than 50 books, which have sold over 2 million copies.  They include classic texts on the Cross of Christ and many books about the New Testament.  At Ridley and in Melbourne he was known for his careful attention to the biblical texts in the original languages and for his skillful communication in a variety of contexts.  He combined firm convictions about the core truths of the Christian faith with a winsome humility.

Second, Neil Bach will be delivering a special lecture at Ridley Melbourne on 24 March 14, at 10:00 a.m. on the topic of “Leon Morris and the Cross of Christ.”  Do come if you can make it! Here’s the blurb:

This lecture is to celebrate the centenary birthday of Leon Morris.The lecture will explore how and why Leon Morris left the depth of a mining town to mine the depths of the Cross of Christ. More particularly how he took on the theologians of his day to shape the thinking about the Cross of Christ for fifty years. We will also look briefly at the critical and lasting influence Leon Morris had here in Melbourne. Neil Bach is a Graduate of Ridley Melbourne and has been in Parish Ministry for 36 years. He currently chairs the Leon and Mildred Morris Foundation and has been writing the Biography of Leon Morris since 2008. He has recently concluded his time as Vicar of Forest Hill to complete the final process of the Biography.

Third, this year’s annual Leon Morris Lecture will be delivered by Mariam Kamell of Regent College at Ridley Melbourne on 26 May 14, on the topic of “Living the Kingdom Law.” Here’s the blurb:

This session deals with the kingdom law as it was instituted by Jesus: you shall love your neighbour as yourself. While this phrase has come to mean many things, this talk will work through the biblical account of this command: from its first appearance in Leviticus 19, through Jesus’ reissuing it as one half of the summative law, to its reappearance in Romans, Galatians, and James. This talk asks the question of what this command meant biblically, where it consistently appears amidst calls to holiness, and what it means practically, as we seek to live out Christ’s transforming love in our culture.