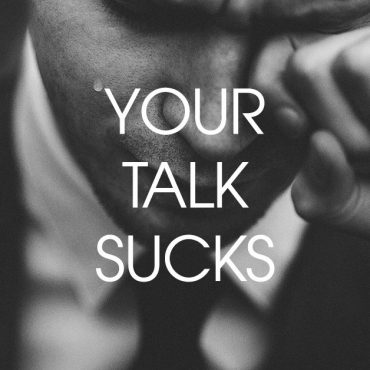 However, since releasing the book I have felt a lot more ambivalent about the title. I’ve set myself up as the guy who does talks that don’t suck. This is a problem because sometimes my talks aren’t great, and now I’m pretending to be some kind of expert.

A few weeks ago at youth group I did a new talk and it wasn’t that good. On reflection, it was probably a good first draft. If I were to do it again, I reckon I could do a pretty good job, but I shouldn’t really be giving talks that are first drafts. Emily heard it and she said ‘It wasn’t your best’, which my mum helpfully translated for me: ‘That means your talk sucked.’ *

My general experience of ministry is that most of the time you feel like you’ve done a mediocre job (which is hard to judge objectively). Some of the time you objectively know you’ve done a mediocre job. And every now and then you can walk away from whatever event you just ran, talk you gave, or conversation you had, and quietly say to yourself ‘I think I did alright’.

While I’d love to always feel like I’m winning, it’s probably best not to always feel great. That would be a dangerous place to be. I’d have little incentive to improve. I’d probably be pretty proud of myself. I wouldn’t feel the need to pray. I’d be more likely to attribute success in ministry to my amazing skills, rather than the work of God. It doesn’t feel good to feel bad, but too much feeling good might be bad.

So what do you do when you’ve done a talk and you realise it sucked?

One: Relax and trust God
The first thing you should do is relax because, the truth is, God will achieve what he wants through his word. It has been my experience that some of the talks I’ve felt the worst about have had the most profound effects for those who heard it. Who knows, the talk you thought sucked may have been the most powerful talk you’ve ever given. But even if no one got anything out of it, most likely people will just forget everything you said, so you don’t need to stress.

Two: Do post-talk analysis
It is always good to figure out what went wrong. So, listen to the recording, read your notes and ask people for feedback. The best opportunities for growth come from when you make mistakes, so make the most of your sucky talk.

Three: Buy yourself an ice cream
Cheer up, you preached the Bible and preaching is good and important work. So, it wasn’t your best? Don’t punish yourself. Jesus won’t punish you, so why should you? Buy an ice cream, take a nap, watch some TV. Do whatever you normally do to recharge after you’ve preached. God’s kingdom won’t collapse because of you, but if you beat yourself up every time you do a sub-par job you’ll definitely be less effective for the kingdom in the long-run as you operate out of a success/failure mindset rather than one that’s fueled by grace.

Four: Do a better job next time
Finally, use the opportunity to take what you learnt from this experience so you can do a better job next time. Let your striving for improvement be an act of worship. The week after my bad talk, I had another talk to do and it was a lot better than the previous one, partly because the talk the week before wasn’t that good. I tried hard not to make the same mistakes, I wanted to do a better job with God’s word. If you let them, bad talks can beget good talks.

‘But Tom, you don’t understand. I heresy-ed! It wasn’t just a bad talk, it was actively wrong.’

Oh dear. That’s no good, but also not the end of the world. Heresy is a big problem when it’s consistently preached as truth. The people who are regularly preaching heresy generally don’t believe they’re doing anything wrong. They think their lies are truth and they refuse to submit to Scripture. But the person who says the wrong thing and corrects themselves is not really a threat. So if you realise something you said was contrary to what the Bible teaches, fix it next time you preach. You can say something like, ‘You know how last time I said “True Christians don’t suffer from allergies”? It turns out that’s not what the Bible teaches and I appreciate having my error pointed out to me. What the Bible does teach is that in the new creation we won’t suffer from allergies or sickness, but until then, while God can heal people, often we, like Timothy, will have upset stomachs (or noses, or skin, or whatever) which may or may not be improved with wine (1 Timothy 5:23).’ Ok, maybe don’t finish all your clarifications with a suggestion that people drink alcohol – especially if you’re speaking to teenagers. But if you realise you made a significant error, fix it and move on. In fact, your admission of fallibility and your willingness to correct yourself according to the Bible will encourage those listening to you to check your teaching (and others’) against the Bible. In the long run, this will make them less susceptible to false teaching.

Finally, if you realise that every talk you do is terrible (and I mean objectively bad, it’s not just your low-self-esteem talking) then feel free to stop doing talks. Not everyone has to be good at preaching. There is no dishonour in saying ‘I don’t think this is my gift’. If all your talks suck and you decide to pursue other ministry opportunities, I promise, you and everyone else will be relieved. You’ll feel the weight lift off your shoulders and you’ll go on to find a ministry that you truly do not suck at. It’ll be great!