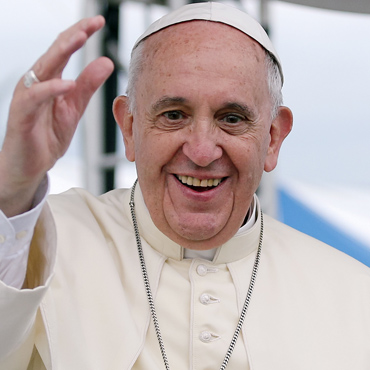 Is Pope Francis Our Pope?

Can faithful Anglicans, particularly those of an evangelical and reformed variety, get caught up in the Pope-mania that is sweeping the east coast of North America? Faculty member, Mike Bird investigates.

It’s hard not to like Pope Francis. On the one hand, he remains religiously and ethically conservative, while on the other hand, he is speaking out on topics like global poverty, climate change, and religious freedom that Anglicans can relate to. What is more, he seems to embody what he preaches. Gone are the fancy hotels, the ritzy cavalcades, I mean, this is a guy who washes the feet of prisoners and hangs out with the homeless. His walk matches his talk. He acts in a way highly reminiscent of Jesus. Let’s face it, the current Pope is a rock star and he’s making Christianity cool again, at least in some respects.

But then again the Anglican church did not break away from Rome simply on account of Henry VIII’s marital mishaps and his quest for a male heir. Rather, the Anglican church took up the protestant cause in its protest against the abuses and abominations of the medieval catholic church. What is more, the 39 Articles explicitly reject the “Romish” doctrine of purgatory and calls the sacrifice of masses an act that celebrates “blasphemous fables and dangerous deceits.” While Anglicans have always wrestled with how to be “Catholic” and “Reformed,” the official line is that we are not part of the Roman Catholic Church, we protestants.

But let’s be honest, it is no longer 1570, the Roman Catholic Church did reform its practices and has evolved in its doctrines especially post-Vatican I and II, positive strides in ecumenical unity have been made, and in a post-Christian context our similarities might be more important than our differences, so much so that a small but significant number of Anglicans have crossed the Tiber to join the Anglican Ordinariate as part of the Roman Catholic Church to escape liberal revisionists in the western church.

I tend to think of the Roman Catholic Church the same way one might think of parents they are estranged from due to certain unhealthy habits their parents have developed. The Roman Church is our family church, we came from them, we share the same Bible, the same Creeds, and most importantly of all we worship the same God. However, issues related to the nature of the church, the sacraments, and salvation and its assurance are big stumbling blocks for those of us who cling to the ancient apostolic faith. The problem with the Catholic Church is that it has introduced doctrinal revisions while claiming that this is what the church has always believed, including things like the veneration of Mary and the practice of indulgences. As an Anglican my protest is that these teachings lack catholicity and apostolic foundation and not a measure of the church’s holiness.

However, every now and then, God raises up figures to purify the church when it needs to be cleansed, and he raises up others to unify the church when it is hopelessly divided. Maybe there is a second reformation coming, a re-do of the Council of Trent, ten thousand protestant denominations discovering catholicity, western secularism forcing us to move beyond being co-belligerents into a new wave of ecumenism, where there is repentance, reform, and renewal on all sides, enabling the global church to be one as Jesus prayed that we would be one! I believe the Holy Spirit can do it and he might even do it in our lifetime. Maybe someone like Francis is the person to be part of such a movement, only God knows!

So what should we think about Pope Francis? Well, you won’t ever see me saying, “Hail Mary!” and I’ve got some beef with purgatory and papal infallibility. But when I see a Christian leader who loves God, trusts in Christ for salvation, who speaks up for the poor and the marginalized, then I’m reminded of an episode form Jesus’ lifetime:

John said to him, “Teacher, we saw someone casting out demons in your name, and we tried to stop him because he was not following us.” But Jesus said, “Do not stop him, because no one who does a miracle in my name will be able soon afterward to say anything bad about me. For whoever is not against us is for us. For I tell you the truth, whoever gives you a cup of water because you bear Christ’s name will never lose his reward.” (Mark 9:38-41)